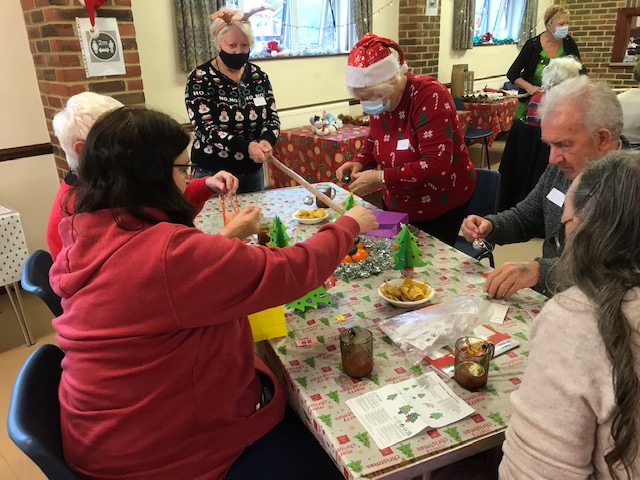 I hope you had a good Christmas and managed to see your family and friends. Winter is truly here now and spring seems a long way off. But here at Memory Lane we continue to offer our services to try and make a difference to people living with dementia and their carers.

The winners in the cash draw for November  were

Winners for December were

Thank you to all who are supporting Memory Lane and contributing to the services we run. If anyone is interested in joining the cash draw, please let me know. Its £10 a month and half of all raised goes into the monthly draw.

Please note going forward we need to be even more aware and keep everyone safe. After a meeting with the Trustees it has been agreed that we will continue with our face to face groups at present. This is with the proviso that everyone wears a mask unless eating/drinking and takes a lateral flow test before each group. We understand people with dementia may struggle with this, but it’s a decision we have made in order to continue. We do have visors available if this helps your loved one. Please be assured we did not take this decision lightly and will  remove the  restriction as soon as we are able to.

We say goodbye to Kay. Although she has not been at group since the start of Covid, she was a lovely lady who always enjoyed our sessions. Our thoughts go to Molly her sister. Who was so dedicated to her.

We also say goodbye to Ken Speed. Again we only had the pleasure of his company for a few months before covid came along. But he was a gentleman and again our thoughts are with Sheila.

Dates for your Diary.

10th  January    2pm Digital Friends in the hall. once a month now.

19th January   2pm - Games with Defiant Sports in the hall.

9th February   2pm Singing with Sharon and Paul. In the hall

16th February   2pm - Games with Defiant Sports in the hall.

23rd February   2pm Singing with Sharon and Paul. In the hall

HELP and Thank You

After more than 7 years our treasurer Nicole would like to take a break for a while. We are looking for someone to help us continue to run our charity.

If you are familiar with Excel and would be interested in becoming a Trustee Treasurer, please let me know. I can outline what the role involves and how  many hours per month it takes.

Meanwhile everyone at Memory Lane would like to thank Nicole for her brilliant work over the years. I personally have known her for over  17 years and she has been a tower of support and I will truly miss her.

This time in January/February 1972…

·
“I'd Like to Teach the World to Sing (In Perfect Harmony)" by The New Seekers was the UK number one for the whole of January, eventually selling over 1 million records in the UK

· The musical drama film Cabaret, directed by Bob Fosse and starring Liza Minnelli, Michael York and Joel Grey, was released on the 13th of February

· The world’s first scientific pocket calculator, the HP-35, was introduced on the 4th of January

Many thanks to Orla Phipps who asked friends to donate to us rather than give her birthday presents. She raised a whopping £135

The family of Doreen Marsden. £140 was donated in her memory instead of flowers.

We also thank the family of Sheila Stringer where £288.60 was donated in her memory.

Lauren Frost kindly helped out at Christmas and donated tins of shortbread for our members as Christmas gifts as well as something for the New Year.

Willingdon School of Dance raised £300 for us from their Christmas Show.

Thank you all so much. All these funds will help us to continue to provide activities in the Eastbourne area for people living with dementia and their families.